Intervention 01: A Season of No Shows 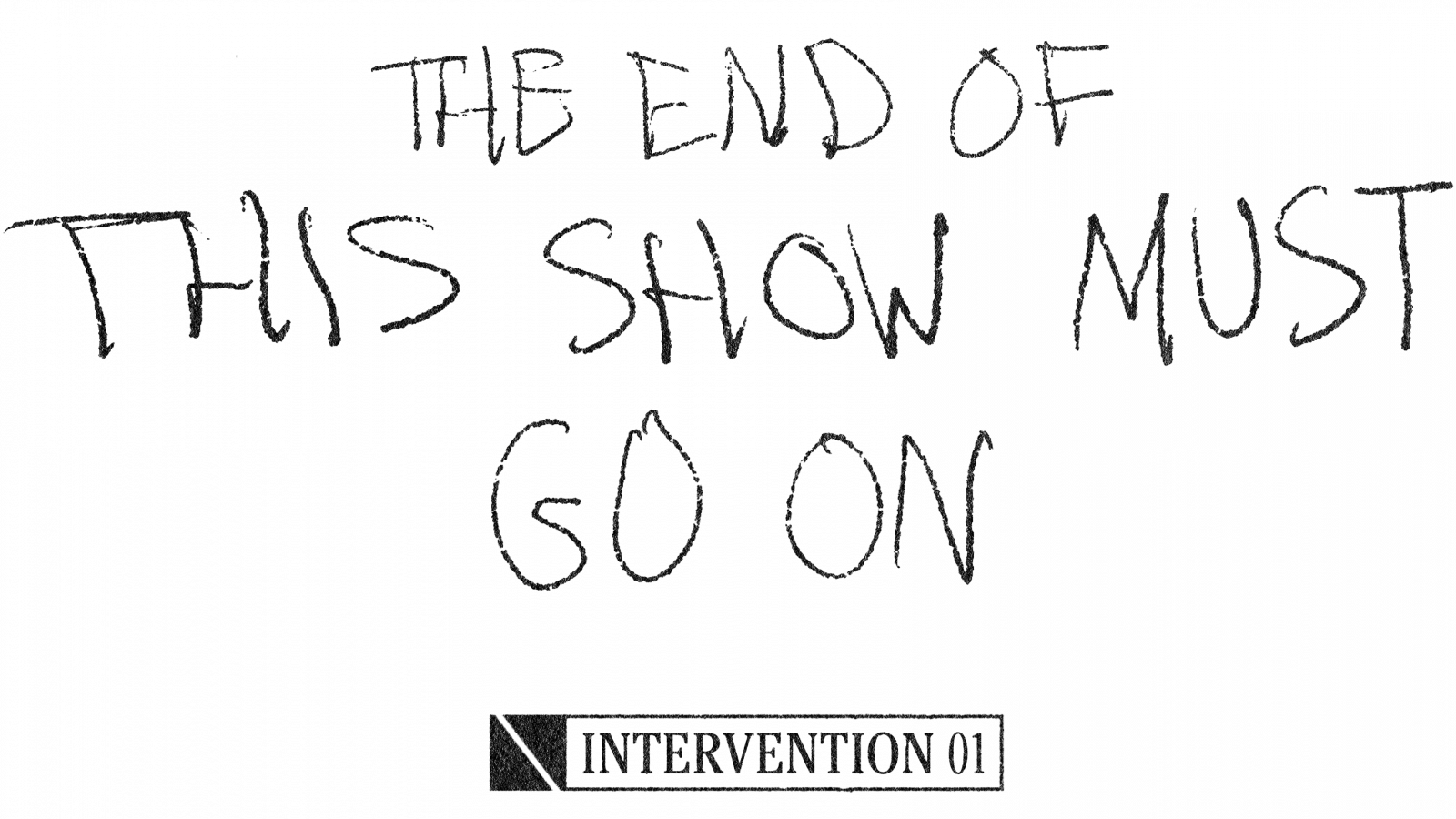 Stopping as a radical act: Towards a new movement in British Theatre, in four parts.

Since coming back things just haven’t been right.

Somehow British theatre feels stuck, and I include NDT in this. Beholden to an invisible web of commitments far from our stages - when we should matter most, we’ve never felt more insular, the work on our stages more homogenous.

We've spent the last year listening to thousands of artists - we even staged a whole festival for difficult conversations - and it's clear we're in crisis. Those early in their careers have never made work outside of austerity, fatiguing Brexit trauma, government-backed culture wars, ‘protected heritage’ and rapidly declining living standards - for artists and for their audiences. All while theatres, including my own, maintain a politically expedient silence.

Artists are burning out. The frantic cycles of bringing theatre back post-lockdowns have exhausted us all. We all promised to come back better - saying all the right things. Then we sleepwalked back to exactly the way things have always been. Artists are trapped in the short-term, tied to work they think will secure funding from a pot that gets smaller every year. Nervous of making art that isn't instantly palatable to the loud and censorious.

Notable exceptions apply, but I suspect most of you reading this will be questioning whether theatre can even change itself, let alone the world. This is the moment to try for more.

Ten years ago, I wrote an article ‘Towards A Companies Theatre’, defining a vision for a unique studio theatre, dedicated to independent companies and ensemble work, asking for those who shared that vision to join me. When I say "I" and "me", I'm writing this in my voice, but this is a team effort, shaped by all our experiences and insights - then and now. The cohort that we drew together back then helped change the game for studio theatres across the country.

Today we stand at another crossroads between the old world and the new. It’s not too late for an intervention, and a decade on I'm asking for your support again to make a change. To work for a divergent future.

If this analysis is correct, then we need theatres to take a big step into the unknown. This autumn, we're taking the biggest one we can. 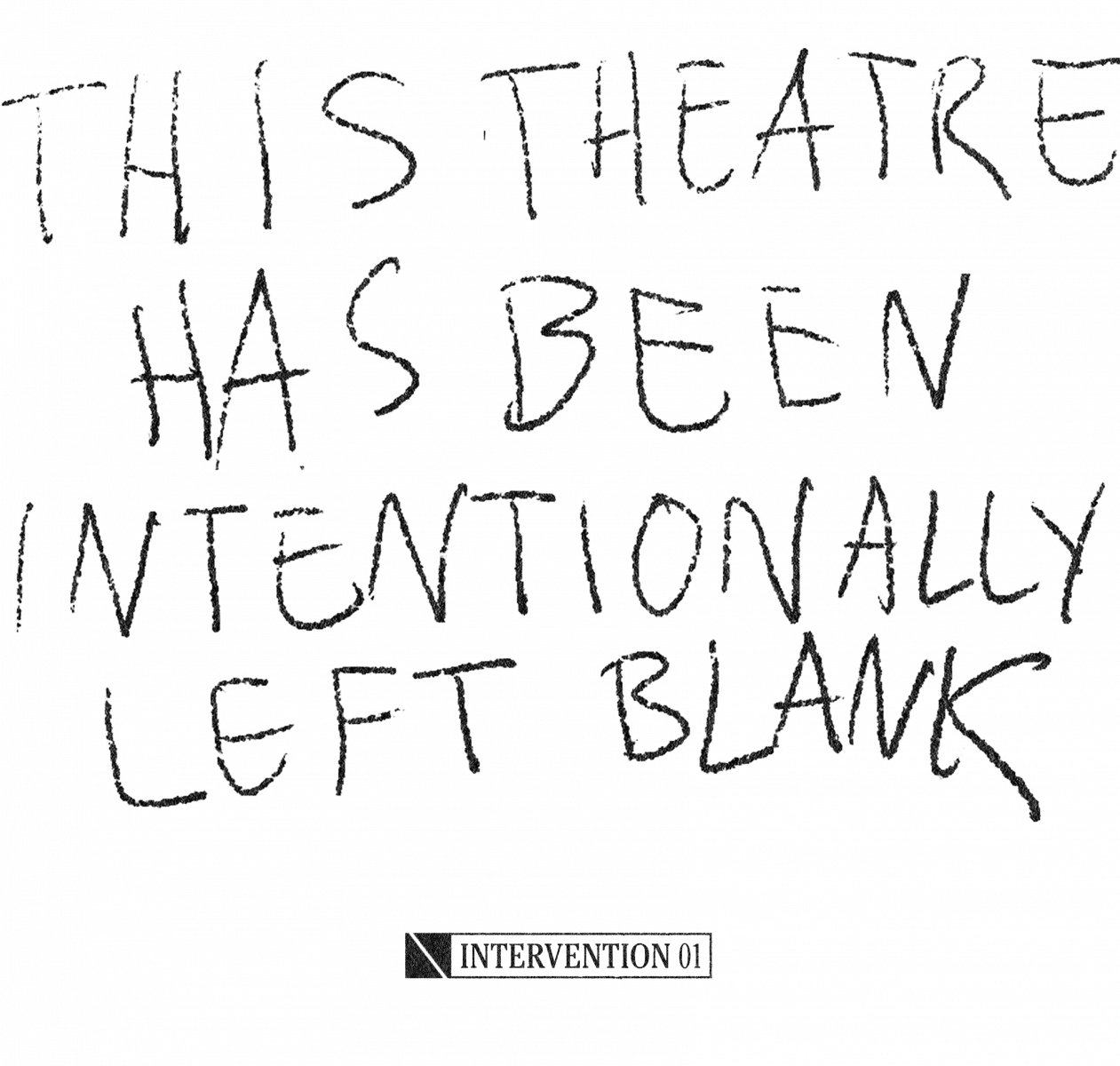 New Diorama is closing. There will be no public performances until at least Spring 2023. We're presenting a season of no shows.

After the most ‘successful’ year in our history, after transfers and awards, after 'thousands of artists supported' through NDT Broadgate, 'the biggest thing we’ve ever done', a billion retweets, we’re just going to stop.

Normally ahead of a season, I’d be at my desk drafting copy to catch the imagination of audiences. But this isn’t a time for a perfectly-worded, round-fonted organisational statement, or a tightly-scripted pastel-infused video. While everything around us begs for more, shouts for more achievement, bigger numbers, shinier shows, stopping becomes a revolutionary act. We could go on as we are, but the successes would be hollow.

Stopping to say: ‘this is how we really feel’. Asking if you feel this way too.

If you don’t, that’s fine. But if you do, then perhaps there are enough of us to make a change.

Enough of us to stop, and re-imagine our theatre from the art up. 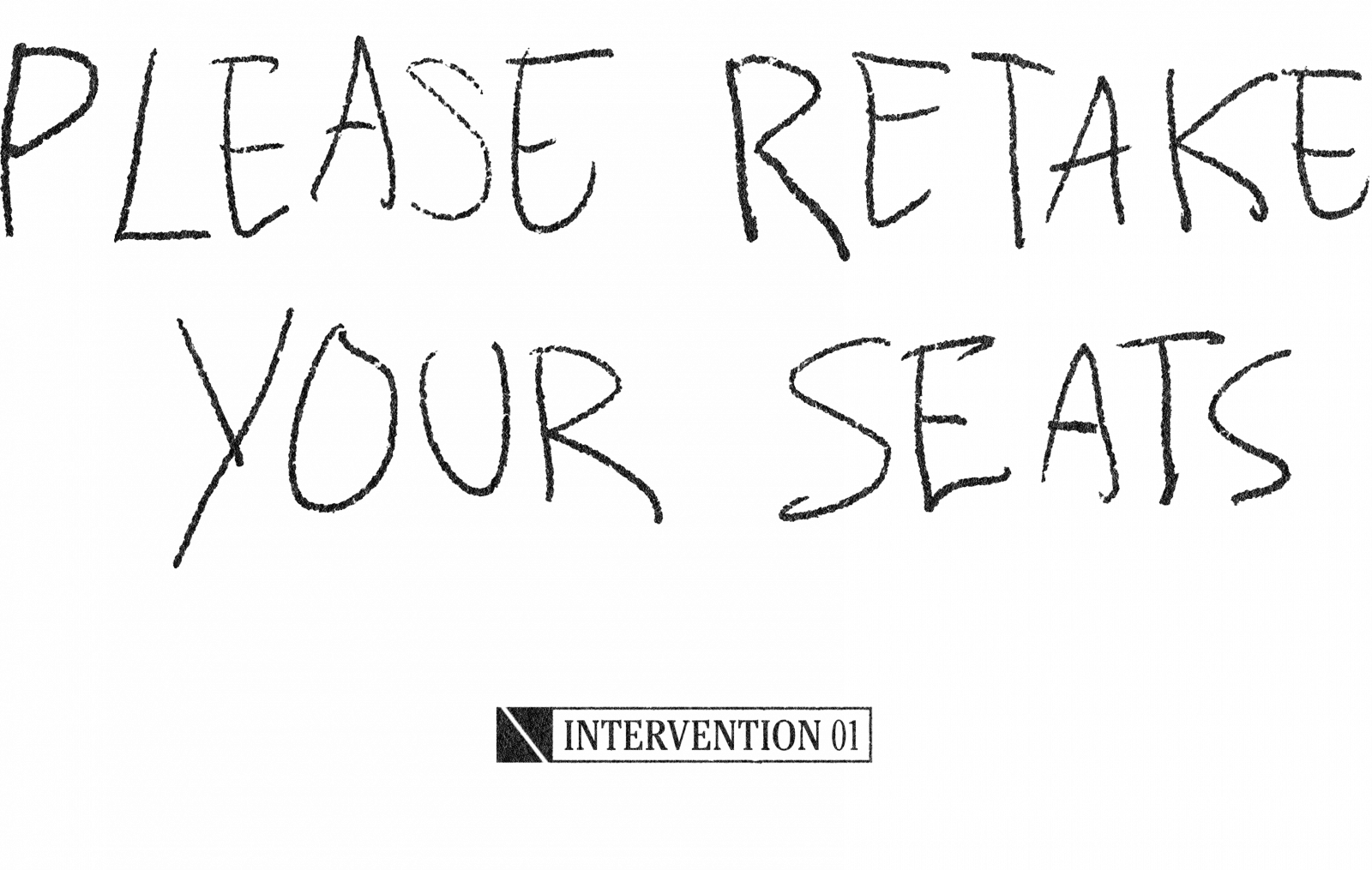 For audiences, some more honesty: I can’t remember the last time I was genuinely nervous watching an audience take their seats, knowing what they were about to experience.

The act of gathering together, strangers and friends shoulder to shoulder, investing our collective imagination, sharing a live experience, is uniquely human. Theatre binds us together like nothing else – and we need it more than ever. After everything we’ve now survived, as an Artistic Director, I can’t help but ask: why have I been playing it so safe? What have we been waiting for? Whose permission are we seeking?

With fewer people in the city, with our homes so much more comfortable and that bit harder to leave, audiences are demanding more. We need theatre at its boldest. And while I know it'll be disappointing for us to be apart for six months or more, we're doing this to bring you the theatre we think you deserve. The shows that aren't quick to make, but stay with you forever.

At NDT and across the country, audiences have not fully returned, and so much of that is down to the propositions we’ve been offering. After this break, we want to welcome you back with a sense of pure anticipation over what you're about to see.

NDT’s audiences are the best: loving theatre in its purest form, generous and willing to take a risk on new work by new artists. We’re going to work as hard as we can to make sure that when we return, it’ll have been worth the wait. 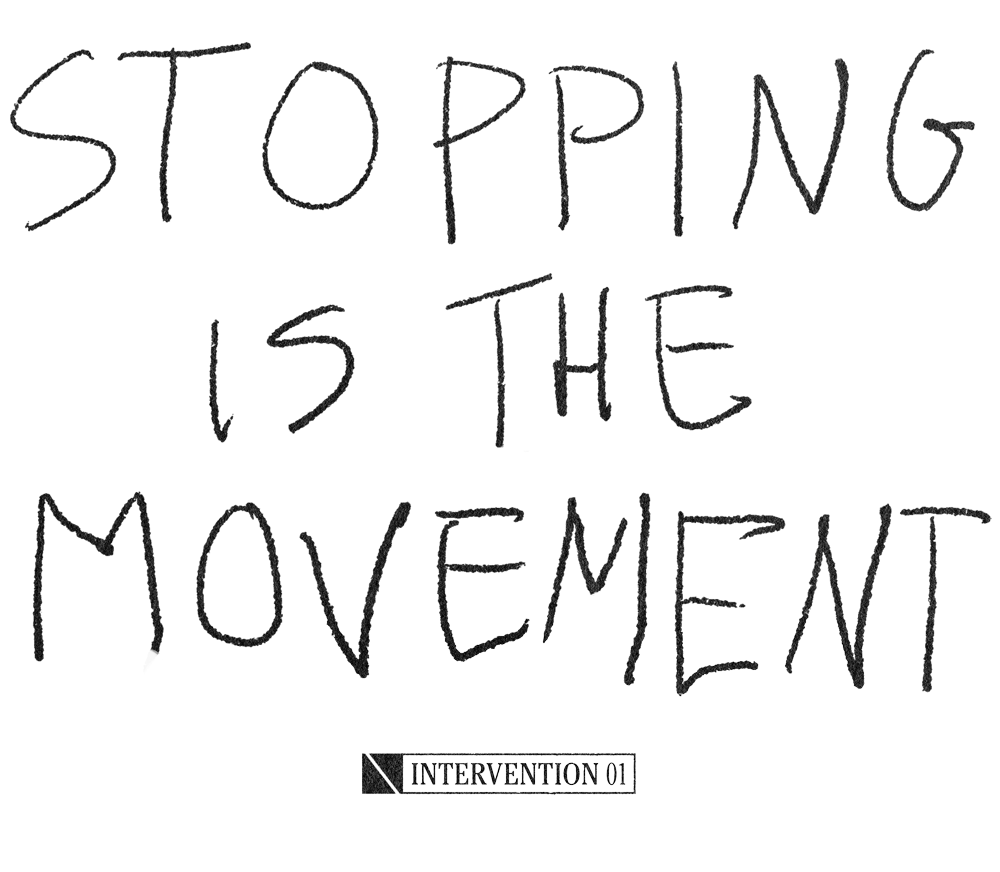 For Artists: free of programming pressure, we’ll focus every resource we have to offer a singular intervention, pledging the single largest artistic investment in NDT’s history. Stopping to give this work, these conversations, our full attention and energy.

We’re looking for theatre companies who fundamentally feel the same way we do, asking for two things. First, some messy complicated ideas that would scare us to programme, that take the risks everyone claims they want to take but rarely do. Let us help you develop them. Second, to help us re-imagine a theatre that genuinely can support and fight for brave work for the next decade. Let's build a theatre strong enough that artists don’t need to be afraid anymore.

It’s time to embrace nuance. And to claim the act of making and sharing live theatre as essential to our lives. Good theatre is a civic gesture, without serving another agenda. We don’t need to emulate any other essential public service to earn our place. Theatre is enough, it’s always been enough.

This leap will look different for everyone. For some, it might be tackling something previously thought forbidden. For others, making an all-out comedy could be a radical act. It can be anything except timid.

It shouldn’t feel like something from before. We'd like to hear new stories, new forms, shows that couldn't even work in our theatre. Work led by artists who don’t traditionally get to lead in this country. Nothing is off the table. There is no table.

I don’t know what we're looking for, but I do know that we can’t carry on as we are. Artists are crying out for theatres to learn from lockdown, to slow rather than endlessly chase growth, to be brave and stand their ground, to listen more. In essence, we think stopping should become a new movement for British theatre, bridging the gap between past and future. It’s possible that we can make this a reality.

This isn't a small internal exercise only for artists we already know. We want theatre makers who resonate with this from across the country (and wider) to join us. We want this to be bigger than ourselves. If other theatres, producers, venues want to join us, you'll be welcomed with open arms.

It's a huge swing, but we’d never forgive ourselves if we didn’t take it. We might miss, but there's a chance we might not.

This is how we’re really feeling.

Do you feel this way too?

Then let’s get to work.

If you’ve made it this far (and well done if you have!), you might be who we need to join us in this work.

We're going to need a lot of help, support and belief to try and make this big swing happen.

Read more about how you can get involved here.

We promise not seeing anything on stage this autumn will be worth it. There are small and big ways you could help at this critical moment, especially (but not only) if you're an incredibly rich person desperate to give away some cash. Find out more here.

→ Other Theatres, Journalists & Anyone Who Wants To Help

We can't do this alone. To make this work, and come out the other side with the next steps, we need all the friends and allies we can get - to amplify and extend our reach, to galvanise a new movement for artists and audiences. If you think you could help, please get in touch with our Executive Director Will Young on [email protected].

And How The Hell Can You Afford This?

Intervention 01 is the first in series of radical interventions to support independent theatre companies.

It's being supported by creative partners Brighton Dome & Brighton Festival and Old Diorama Arts Centre; and by the intrepid folk at Arts Council England, Jerwood Arts and The Harold Hyam Wingate Foundation. 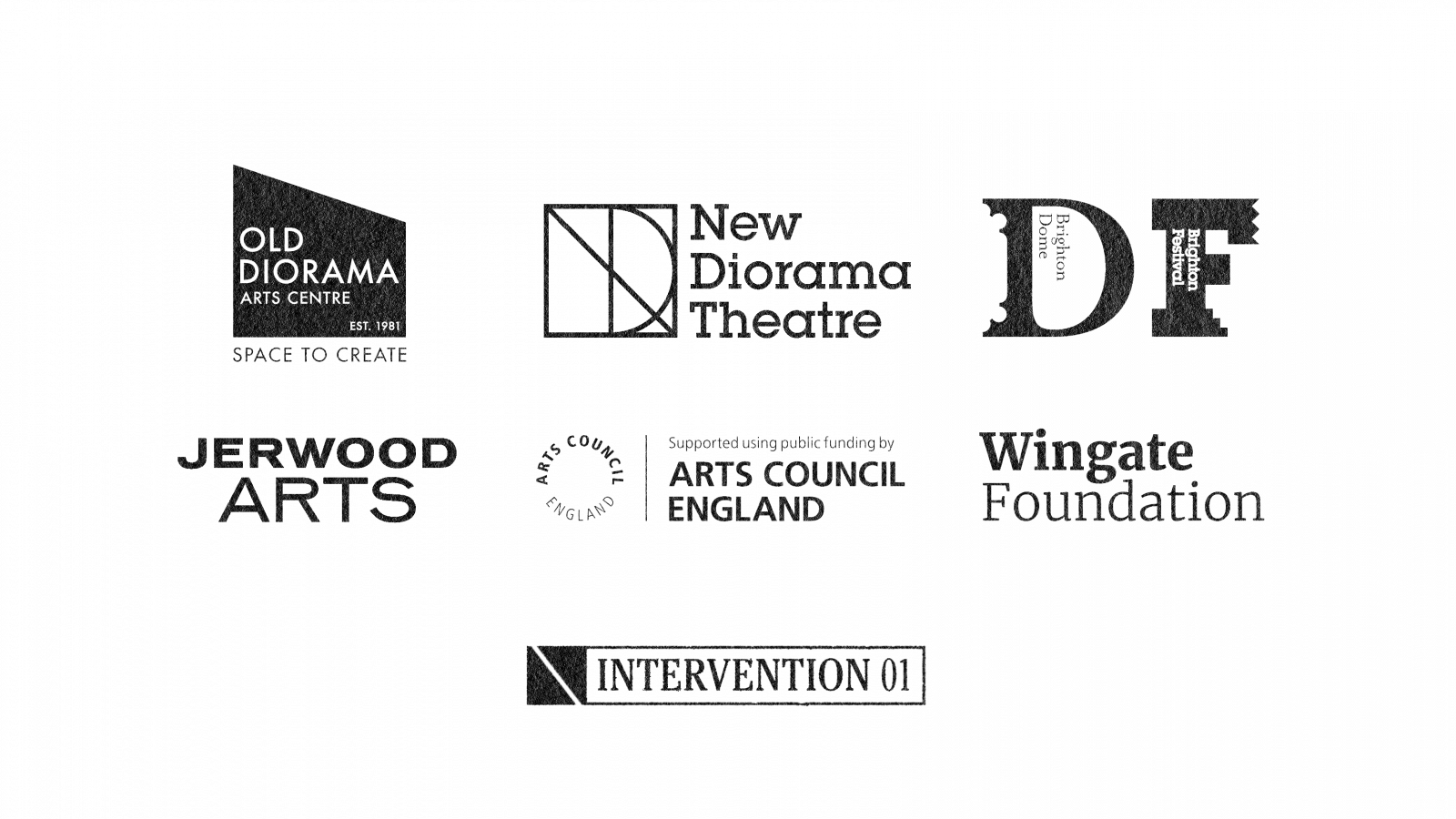